ODESSA, TX – The Lady Panther were back in action on Friday evening in the PHS Fieldhouse.  Despite a strong third quarter surge, Permian came up short in a 55-48 non-district loss to Seminole. 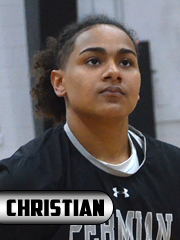 The Maidens got off to a quick start and grabbed a 15-10 first quarter lead.  Senior Daysia Christian was limited to a single bucket, while Karen Guzman had a goal and a three-pointer.  Camila Leal was also able to drop a three.

Turnovers and defense ruled the second frame.  The Panthers had a total of three goals find the cylinder from Guzman, Christian, and Natalia Baeza.  Seminole, led by Xoe Rosalez, added another nine points to take a 24-16 lead at the intermission.

The Black Cats were more assertive in the third quarter, and did a better job of scooping up rebounds and forcing turnovers.  Christian imposed her will in the paint and added another four goals and a free throw.  Nodia Cooper got into the act and nailed a pair of buckets.  After three lead changes, the Lady Panthers trailed 35-32 going into the fourth quarter.

Permian was able to match the third quarter success with 16 more points, but came up short of regaining the lead in the final stanza.  The Panther defense was unable to contain Rosalez, and the Maidens added another 20 points to secure the 55-48 win.

Christian led all scorers with 18 points.  Guzman finished the evening with 13, which included a pair of three-pointers.  Cooper and Leal each added five points.

IN JV ACTION…
The Mojo junior varsity also played host to the Maidens in the early game.  Despite a late rally attempt by Seminole, the junior Lady Panthers held on to claim a 35-32 victory.  The Panthers will take a break to enjoy Christmas before returning to action.  The Permian varsity will be competing in the Caprock Classic (December 26-28) in Lubbock.