ODESSA, TX – The Permian girls basketball team started 2020 just as they finished 2019 with a 49-27 win at the PHS Fieldhouse.  The Lady Panthers led throughout the final non-district game against Sweetwater on Friday afternoon. 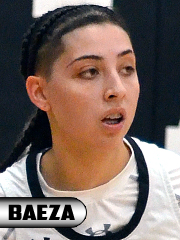 Head coach Macee Lane likes the timing.  After defeating Monahans 55-39 on Tuesday, today’s win is a springboard into next Friday’s district opener.  “The back-to-back wins are a great way to end non-district.  We had a good week with positive results… right before district play.”

Daysia Christian anchored the Mojo offense, scoring in all quarters for a total of 13 points.  Jae Savage assisted in the scoring in the opening frame.  Karen Guzman took her turn in the second.  Natalie Baeza made an eight point contribution in the second half.

The Lady Panthers got off to a sluggish start but finished the first quarter with 12 points.  A strong Mojo defense limited the Bulldogs to five.  Sweetwater was held to single-digit quarters all afternoon.

Permian matched the offensive production in the second stanza.  Guzman nailed a pair of three-pointers and two free throws.  Christian made it impossible for Sweetwater to penetrate the paint with any consistency.  As a result, the Bulldogs were forced to attempt difficult perimeter shots with little success.  Mojo took a 24-13 halftime lead into the break.

The Lady Black Cats continued to control the tempo in the second half.  Nodia Cooper and Rylee Talbot joined the party with solid play.  Both collected baskets while constantly pressuring the ball to secure the 49-27 decision.  Christian led all scorers with a game-high 13 points, while Baeza and Savage finished the afternoon with eight each.  Guzman made two of the four three-pointers for Mojo and recorded 10 points in the win.

The Lady Panthers will take their back-to-back victories into the start of district action.  Permian will head to Wolfforth for a date with Frenship in The Pit next Friday.