ODESSA, TX – For the third consecutive year, the Mojo Machine has ascended to the top of District 2-6A.  The Panthers disposed of Midland High 88-42 in the district finale on Senior Night in the Permian Fieldhouse. 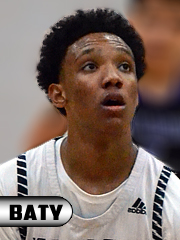 The Black Cats dominated all facets of the game.  Offensively, three players racked up double-digit scoring.  Shy Stephens-Deary led all scorers with 23 points. Zay Pierce knocked down 16 points, while Nakavieon White finished with 15.  Cedric Baty led all Permian players in assists with 11, and he also topped the steals category with five.

Head coach Tim Thomas thought the team did well at making positive contributions, but thinks it’s time to raise the bar.  “We need our guys to step up, because we haven’t been very deep during the season.  Playoffs are here, and we got to have some guys step up.”

The Bulldogs made the game’s first basket, and that seemed to be enough to inspire the Panthers to put on a first quarter clinic.  A handful of transition baskets and forced Midland High turnovers ignited the Mojo charge.  White brought a response from the crowd when he nabbed a loose ball and finished with a tomahawk slam dunk. Permian capped-off the quarter on a 13-0 run and enjoyed a 24-4 lead after one period.

In a slower-paced second stanza, Permian spread the ball around more.  Pierce dropped in a pair of three-balls in the cylinder, and J.J. Vizcaino rattled in another three.  It would be the lowest points by quarter produced in the game, but the Panthers still outscored the Bulldogs 15-13 to take a 39-17 halftime advantage.

Midland High came out and opened the third quarter with a pair of baskets to cut the Permian lead to 18.  Two free throws gave the Bulldogs hope by narrowing the deficit to 39-23.  That’s when Stephens-Deary erupted with four goals and a three-pointer.  White and Pierce each added three-ball to extend the Mojo lead to 66-29 by quarter’s end.

The final eight minutes Permian showed it had some depth.  Sammy Garcia and Calvione Calicutt each added a pair of goals.  Keyonta Johnson was on fire and made his presence known down the stretch – nailing a three-ball, crashing the offensive boards, and adding three steals.  The Panthers finished with 25 assists and 23 steals on the night.

Permian (9-1) and Amarillo Tascosa (9-1) both picked up victories this evening.  The Mojo Machine will take the top seeding from District 2-6A and will play the first round in front of a home crowd.  Coach Thomas thinks it will provide a great atmosphere for our community.  “The fans need to come out and pack the place.  It’s the playoffs. It’s now do or die, so everybody needs to come out and cheer for our kids.  Let’s help push them over the top.  It’s gonna be exciting.”

In preparation for the second season, the Panthers will host Seminole on Friday at 6:00 p.m.  The Indians are a 4A powerhouse and went undefeated (8-0) in district this season.  The Class 6A Bi-District playoff will be next Tuesday evening at the Permian Fieldhouse against El Paso Socorro (5-5) at 6:00 p.m.  Tickets will be available for both contests on the day of each game in the Fieldhouse foyer.  Students tickets are $3.00 and adult tickets are $5.00.