Van Horn, TX – In their final non-district game, the Permian boys basketball team unleashed a dominating second half performance in a 63-41 convincing win over El Paso’s Pebble Hills on Saturday in Van Horn. 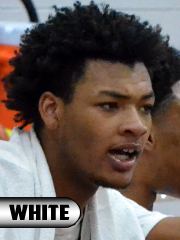 Nakavieon White turned in an impressive 37-point effort to lead all scorers.  The senior forward credited his teammates for the success. “I feel like I couldn’t have scored any of those points without my teammates trusting in me and getting me the ball.” says White.  “I couldn’t have had it without them.“

The Spartans came out ready to play to open the contest and managed to keep pace with the Panthers.  White contributed eight of the 13 first quarter points for Permian, while Pebble Hills collected 16 to take a three point lead.  Five different players from El Paso had shots find the cylinder, including a pair of three-pointers.

The Panthers and their signature relentless defense stepped up in the second frame.  The Spartans were limited to a single bucket the full eight minutes of play.  Shy Stephens-Deary, JJ Vizcaino, and Jase Taylor provided the reinforcement on offense.  Permian took the lead and never allowed Pebble Hills to get back in the game.  The Black Cats took a 25-18 advantage into the intermission break.

When asked about the halftime conversation in the locker room, Coach Thomas confided, “I told them we didn’t come out ready to play our brand – tough, hustle, defend, and disrupt.”  The Mojo Machine responded with a higher level of play and domination of the scoreboard… and second half.

Taylor, Stephens-Deary, and Keyonta Johnson were productive in the third stanza, plus White added 11 more to the tally.  Permian racked up 19 points in the third quarter, and matched that with another 19 in the fourth. That would cap the scoring at 63 points for Mojo to the Spartans’ 41.  With the victory, the Panthers improved their non-district record to 18-2.

The ‘real’ games will now begin as Permian hosts Midland Lee on January 17 for the District 2-6A home opener at the PHS Fieldhouse.