ODESSA, TX – Permian hoped to keep the district win-streak alive after downing Midland High on Tuesday.  The other 2-6A combatant from Midland had other plans, as the Lee Rebels dished out a 52-20 defeat to the Lady Panthers at the PHS Fieldhouse. 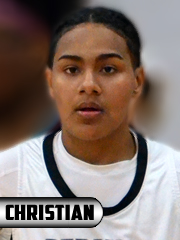 Anytime an opponent can hold Daysia Christian to single-digit points, it means – Permian’s offense is struggling or the opponent has a very good defense.  In Friday’s contest, it was both.  According to head coach Macee Lane, “We just couldn’t get anything going offensively.”

The Lady Rebels scored the game’s first 11 points, and it wasn’t until two minutes remained in the opening frame that Guzman got the Lady Panthers on the scoreboard.  Two missed free throws and a lot of full-court pressure had Mojo trailing 11-2 at the end of the first quarter.

The Lady Black Cats continued to have difficulty getting the ball past half court in the second quarter.  Guzman scored five, Christian two, and Natalie Baeza made a free throw for Permian to add eight to the tally.  Mojo failed to collect a single double-digit quarter all evening.  Lee, on the other hand, had double-digit marks in all four quarters, including 16 in the second stanza.  The Lady Panthers trailed 27-10 at the break.

Permian was unable gain any ground in the second half.  Jae Savage made a pair of buckets in the third quarter.  Christian added four in the final eight minutes, and Rylee Talbot also had a shot drop into the cylinder in the fourth quarter.  Lee added 15 more to claim the 52-20 road win.

The Lady Panthers (1-2) will now leave the loss in the past and turn their attention toward crosstown rival Odessa High (0-3).  The tip-off is next Tuesday at 6:00 p.m. in the OHS Gymnasium.  Permian is tied for third place in the district standings.