Midland, TX – Under rainy conditions, both the Girls and Boys teams from Permian made short work of Midland Lee on Tuesday at Grande Communications Stadium.  The Lady Panthers scored a 4-1 victory, while the Mojo guys picked up a 4-2 decision over the Rebels. 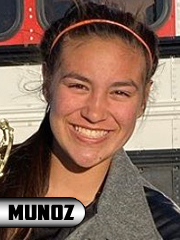 Nyxalee Munoz led the offensive effort for the Lady Panthers with two goals.  Both of those coming in the second half.  Both teams struggled to make any headway early.  Midway into the first half, Permian threatened but had the shot bounce off the crossbar.  Not to be denied, Angeli Nunez rifled a shot into the net for a 1-0 Mojo lead.

Abbey Ward nailed a shot between the pipes off of a corner kick from Ailene Castillo to double the deficit to 2-0.  That’s how the scoring would end in the first half with the Lady Panthers possessing a two goal lead.

Permian controlled much of the second half and pushed the lead to 3-0 when Nunez led Munoz outside the Midland Lee box.  Munoz finished the effort with a crisp kick into the net.  The Lady Rebels broke the shutout with a goal at 11:22 remaining.  Munoz collected her second goal late in the half to secure the 4-1 district win for the Lady Panthers.

In the second match between Permian and Midland Lee, Aiden Everett and the Panthers denied a late charge by the Rebels to secure a 4-2 victory.  Cristian Acevedo scored the lone goal of the first half to give Permian the 1-0 lead at the intermission.

The Rebels evened the score early in the second half, but the Black Cats regained the lead seven minutes later on a goal by Aiden Everett.  He drilled a free kick between the posts from 15 yards out for the 2-1 advantage.  Late in the half, Lee knotted the match on a deflected penalty kick.

Everett again broke the tie for Permian when he scored on another free kick.  Alexander Salcido put the nail in the coffin two minutes later to secure the 4-2 win for Mojo.