Odessa, TX – It was a tight ballgame through four innings, but the Lady Panthers softball team unleashed a seven-run sixth inning to dish out a 13-4 defeat of Monahans.  Makayla Sanchez, Aliyah Lara, and Arianna Ybarra contributed homeruns in the Mojo victory on Tuesday afternoon at the Ratliff Softball Complex. 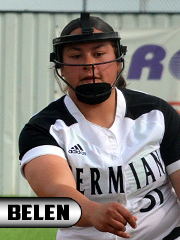 Alexis Belen got the start in the circle for Permian, striking out five, walking two, and giving up no runs.  She exited the game in the top of the third, after absorbing a line drive to her leg.  Mariah Rey took over and struck out four, while limiting the Lady Loboes to four runs.

Sanchez and Lara led the assault at the plate.  Sanchez logged four runs batted in from two hits, while Lara drove in three runs on three hits.  Emma Chavez collected a pair of base hits and free trips to first base in her plate appearances.

Coach Angela Arebalos thought the Lady Panthers turned in a solid performance and stayed focused from start to finish.  “We played a good team today and fought through some rough innings with bases loaded and and came through defensively. Offensively, we did a great job of being disciplined and having several quality at-bats to back our pitchers. Overall, we played a great game and stayed mentally focused.”

After the first three batters reached base to open the game, Belen battled back with three consecutive strikeouts to leave the three Lobo runners stranded.  The Lady Panthers took their first turn at the plate and immediately went to work.  Madison Garcia led off with a single and advanced to second base on a sacrifice by Tiggy Rayos.  Lara powered a bomb over the left field fence for a 2-0 Mojo lead.

After a scoreless second frame for both teams, Monahans again loaded the bases in the top of the third on a pair of singles and walk.  Back-to-back strikeouts and a popout left the Lady Loboes standing on bases but unable to cross the plate.  Permian added two runs to its lead in the bottom of the inning with the assistance of an infield error.

Monahans knotted the game in the top of the fourth on a pair of two-out two-run homers, but the Lady Panthers answered with two runs of their own. A sacrifice fly by Lara and an RBI single by Sanchez preserved a two run advantage at 6-4.

After a scoreless fifth, a three-run homer by Sanchez and grand slam by Ybarra in the sixth inning played highlight to a seven-run effort to essentially put the game away.  Permian’s defensive gloves shut the door with a three batter top of the seventh for the 13-4 lopsided victory.

The Lady Panthers will close the non-district slate of games this weekend in San Marcos at the Rattler Spring Break Classic. District action will begin on March 17 at Midland High.