The Mojo softball program is in its debut season under new head coach Angela Arebalos. 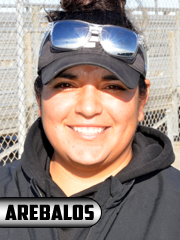 Coach Arebalos is in her first year at the helm, but has already proved her worth.  In 2017-18 season, she led the softball team to the Regional Finals of the state playoffs as an assistant coach.  Arebalos has served as a coach for Permian for five years.  Prior to PHS, she coached at Fort Worth Christian and for the Batbusters Select softball team for three years.

A graduate of Richland High School in North Richland Hills (Texas), Arebalos played volleyball, basketball, and softball in a tough Metroplex district.  She continued her sports career on a softball scholarship at Texas Woman’s University in Denton (Texas) and majored in Psychology.

Her coaching resume includes being named ‘District 5-6A Sub-Varsity Coach of the Year in 2017-18.  She hopes to teach young ladies the game of softball and the importance of accountability, sportsmanship, and responsibility. According to Arebalos, “It’s not just about softball, but teaching the athletes several life lessons that can mold them to one day become leaders as adults.”

One of her many goals is to have 100% graduation rate on time for all her athletes.  Arebalos has already set the first bar for the Permian softball team to finish in the top three in district.  It would also include making it to at least the second round of the state playoffs and beyond.

Check out more info on our Softball program.