Odessa, TX – Permian hosted Odessa High in the District 2-6A home opener for the Panthers on Tuesday night. After a contested affair that lasted 31 minutes, the last 24 seconds decided the 61-59 outcome in the Permian Fieldhouse with the Bronchos escaping with the win.  It’s their first district win over the Panthers since 2014. 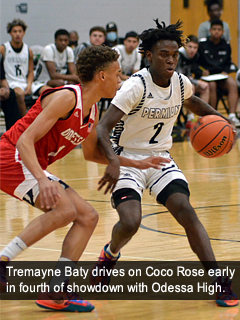 The back-and-forth affair saw OHS take an 18-15 first quarter lead and maintain that three-point difference into the break.  It was the final 30 seconds that provided the thrilling end for the capacity crowd.

Down by two, Mojo’s Cedric Baty advanced the ball to midcourt before passing to the right wing to Tremayne Baty.  The younger Baty surveyed the defense and passed the rock back to the top of key.  With 24 ticks remaining, Cedric fired a 30-footer that ripped the net to tie the game at 59-59.

Taking the ball into Mojo territory with 0:18 on the clock, LJ Willis dribbled in and attempted a shot from 15 feet out, but it was partially deflected by Race Herr.  Ivan Carreon gathered in the offensive board and tried the put-back, but that was also tipped by Herr. Carreon, making his only two points in the quarter, put up a tear drop third attempt that bounced off of the backboard and fell into the cylinder as the buzzer sounded.

Odessa High took an early lead, but Permian settled in and matched stride with the Bronchos to finish the first quarter.  Carreon led all scorers with six points through the first eight minutes.  Playing through injury, Calvione Calicutt added a pair of baskets while scooping up missed shots off of the defensive glass.  Herr got two 3-pointers to fall to keep the Black Cats within striking distance in the second stanza.  The second trey came as the 6-foot 10 junior forward beat the clock to end the quarter.  By the end of the first half, both teams had added 18 points each for the Panthers to remain trailing by a 36-33 edge.

Both teams made adjustments during the intermission which became evident on the defensive side of the ball.  The low-scoring third period allowed Permian to even the score and take a three-point lead before Odessa High went on a run late in the quarter to regain a two-point advantage at 46-44.

The Black Cats remained resilient in the final eight minutes but couldn’t turn the tide and hold another lead of their own.  Just as Baty’s late three looked to be sending the game into probable overtime, the Bronchos spoiled the district opener as the clock hit all zeros.

Cedric and Tremayne each finished the night with 15 points, with the elder Baty knocking down three treys in the second half.  Herr backed them up with 12 points, including three 3-pointers of his own in the first half.  While the Bronchos were perfect in shooting 12-for-12 free throws, Permian finished six-of-10 from the line.

In the early game, the Permian junior varsity knocked off the Odessa High JV, 71-55.  The Panthers (13-3) will briefly take a step away from the district run when they travel to Lubbock for the Fibermax Caprock Classic on December 29-31.  District 2-6A action will resume for Permian on Tuesday, January 4 at the PHS Fieldhouse. The Mojo Machine will host Midland High with the JV playing at 6:00 p.m. and the Varsity following at 7:30 p.m.

** Make sure to mark Tuesday, January 25 on your calendar for Permian vs. Odessa High – Round II at the OHS Gymnasium. The Lady Panthers will play at 6:00, with the tip for the guys slated for 7:30. The junior varsity games will be played across the street at the other gym (Girls-4:30 / Boys-6:00). Parking will be at a premium in the area from late afternoon into the evening so make sure to arrive early.