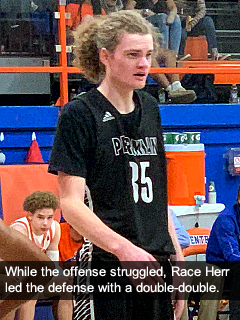 While it didn’t help matters being absent starting senior guard Cedric Baty and junior Rodney Hall, the Permian offense found itself out of sync most of the contest.  As a result, junior forward Race Herr stepped up his game on one end of the court while sophomore Ben Saldivar led all scorers with a 20-point effort on the other end.  Herr finished the night with a double-double recording 14 blocks and 12 rebounds.

While a low-scoring first quarter, the early stages of the contest set the tone for yet another catfight between the Panthers and Bobcats.  Central opened with the game’s first four points, and Permian responded with a pair of treys from Saldivar and Calvione Calicutt.  A trade of baskets left Mojo possessing an 8-6 advantage after eight minutes of play.

Even as Permian remained in striking distance, turnovers and ill-advised shots plagued the visiting Panthers throughout the night.

The second frame offered a back-and-forth exchange, with the Bobcats eventually outscoring the Black Cats and buffering a five-point edge.  Central took a 22-17 lead into the halftime break.  Permian erased the deficit as Saldivar dropped three consecutive buckets through the cylinder to give the Panthers a 23-22 lead just one minute into the third quarter.

A six-point run by the Bobcats had Mojo trailing once again by five.  Brian Huitron made a perimeter three to narrow the difference, but Central answered with a three-ball of its own for a 33-29 lead at quarter’s end.

Both team put forth their best offensive display in the final stanza.  Central opened the quarter with a trey, but Permian answered with a pair of baskets from Saldivar and Herr.  A string of perimeter three’s rained down, two book-ended  another Huitron three.  The Panthers was unable to gain any traction as vital minutes burned off of the clock.

Mojo miscues again reared their head as the Bobcats converted three consecutive turnovers into a quick seven points.  Saldivar hit another trey but Central answered the final three Mojo scoreless possessions with four points for Permian to come up on the short end of a 51-43 decision.

The Panthers (1-2, 16-6) will travel to Lubbock for a non-district game on Tuesday before resuming the district race.  They will host Midland Legacy (1-2, 13-9) on January 14 at the Permian Fieldhouse.