Odessa – Third time wasn’t the charm for Permian in the Area Round of the Class 6A Division I state playoff.  Arlington Martin jumped out to a 28-7 halftime lead and extended the margin in the second half.  The Panthers’ season came to an end with a 71-28 loss to the Warriors on Friday night. 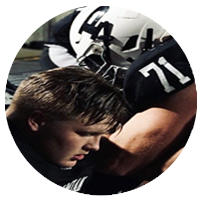 Permian has met Martin in the Area playoff three times, and three times the Panthers have exited early… courtesy of the Warriors.  We now know this for sure – continually running up the middle with eight in the box does not work.  Better results occur when a team is better prepared.  The 71 points given up also sets a school record that dates all the way back to the inception of the football program in 1959.

Martin came out firing in the first quarter and slapped two touchdowns on the board before the Permian offense could even in gear.  A 12-yard back shoulder pass into the endzone and 7-yard run to paydirt on back-to-back possessions gave the Warriors a 14-0 lead.  The Panthers had two turns with the ball, but both consisted of three plays and a punt in the first quarter.

The Black Cats settled in and opened the second frame with a 10-play, 69-yard scoring drive.  Kept alive with a fake punt on fourth-and-eight, Carson Roberts tossed a 14-yarder to Chase Stell to get the Panthers to the Martin 34.  The drive would pay dividends when Easton Hernandez crossed the goal line from four yards out.  Martin matched that with a 6-play, 62-yard drive that included at 25-yard TD strike.

Permian drove down the field on the next set of downs, but an interception on the Martin 37 killed the drive.  A defensive battle resulted in an exchange of punts; however, a blocked punt gave the Warriors great field position and the ball on the Mojo 30.  Three plays later, a 14-yard scamper into the endzone gave Martin a 28-7 lead that held until halftime.

Permian came out focused in the first drive of the second half.  Malachi Medlock bulled his way across the goal line to cap a 9-play touchdown drive.  The Panthers narrowed the deficit to 14 points.  From there, the Warriors went on a rampage that left the Panthers back-peddling.  Four consecutive scoring drives filled the third quarter and gave Martin a comfortable 57-14 lead.

Each team scored twice in the final 12 minutes.  Hernandez scored on a 27-yard run, and Medlock added a 55-yarder.  The sophomore running back led all rushers and finished the night with 161 yards and two touchdowns from 26 carries.  Hernandez followed with 16 touches for 115 yards and two scores, while Alex Rose added 51 rushing yards on five carries.

The Panthers finish the season as co-District 2-6A champions and Class 6A Division I Bi-District champions.  It wasn’t the season hoped for, but it was a season that Odessa High and Midland High would have loved to have had.