Lubbock, TX – Too many uncontested shots in the paint resulted in Permian suffering its first loss of the season in the Lions Den on Friday.  Trinity Christian controlled the second and fourth quarters in the 71-64 Mojo loss. 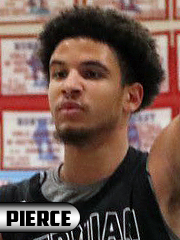 What started out the makings of a typical Mojo outing ended quiet the opposite.  The Panthers took command early and slapped 25 first-quarters points on the scoreboard.  Zay Pierce had the hot hand and dropped in three treys.  Race Herr backed that up with seven of his team-high 26 points.  The Lions looked for answers as they trailed 25-13 after just eight minutes of play.

Permian experienced one of its worse quarters of the year in the second stanza.  Trinity found the answer and was able to chip away at the deficit.  That would consist of starting the second period with two quick baskets, a steal, and a transition layup.  That, in turn, led to Coach Tim Thomas immediately calling for a needed timeout.

Shots wouldn’t falls for the Panthers on one end of the court, while put-back goals from offensive rebounds and uncontested trips into the paint afforded scoring opportunities for the Lions on the other.  Permian was limited to a mere seven points, while Trinity put up 26 in the quarter.  The Lions fought back and tied the game at 30-30 with 2:20 on the clock.  Two 3-pointers followed and an exchange of baskets sent the two teams to the locker room with Trinity now leading 39-32.

Permian came out with a revitalized focus in the third stanza and rode heavily on the talents of Herr.  Like a Panther looking for its prey, the sophomore post took over on both ends of the gym.   Herr ripped a perimeter three, and then blocked back-to-back Trinity shot attempts.  After a bucket by Calvione Calicutt, Permian knotted the game on a Herr put-back goal midway into the quarter.  Three lead changes ended with Mojo back in front 50-49 at the end of third.

While Herr added yet another 10 points in the final period, offensive support for the Panthers was limited to two baskets by Pierce and Kyson Moreno.  Similar to the second quarter, the Lions racked up 22 points with little resistance through the lane.  The Panthers were forced to play catch-up the last four minutes of the game, which they were unsuccessful in the 71-64 loss.

The Panthers will need use short memory and put this loss behind them, as they will immediately hop back on the bus and meet Rockwall Heath halfway in a non-district game on Saturday.  The teams will square off at 5:00 p.m. in the Jim Ned High School gym in Tuscola.