Odessa, TX – Permian started the District 2-6A schedule with a 77-52 victory over Odessa High in the OHS Fieldhouse on Tuesday evening.  Holding a narrow 27-25 halftime lead, the Panthers erupted with 50 second half points to claim their first district win of 2020.

Sophomore Race Herr led all scorers with an impressive 21 points. 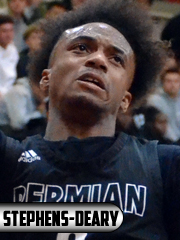 In his first court appearance of the season, Shy Stephens-Deary turned in a 20-point evening.  Zay Pierce following with 14 points, including a pair of treys, in the winning effort.

The trio led the charge in the first eight minutes of play for the Panthers to build a 14-point lead.  On the other end of the court, shots just wouldn’t fall for the Bronchos. There wasn’t a lot of those in the first quarter as full court pressure proved brutal with almost all ball movement getting contested and squelched.

Permian watched that lead dwindle down in the second stanza.  Fouls would rule the quarter, allowing Odessa High to add 11 of its 21 points from the free throw line.  A couple of baskets from Calvione Calicutt and a perimeter three by Pierce late in the quarter left the visiting Black Cats ahead by only two points at the intermission.

After some halftime tuning, the Mojo Machine fired on all cylinders and erupted on the little red ponies in the second half.  Taking a 27-25 deficit and expanding that lead to 52-34 by quarter’s end, Permian added 25 points in the third quarter and another 25 in the fourth.  Herr and Deary accounted for 16 of the third quarter points, which bettered the nine put up by the entire Broncho team in the period.

Unable to keep pace, Odessa High could only watch as Herr and Deary duplicated their production of the third quarter again in the final frame.  Ben Saldivar joined in on the lashing in the fourth period, making a pair of buckets and collecting a couple of steals along the way in the 77-52 Mojo victory.

Other than losing a little focus in the second quarter, the Panthers opened district play with several positives to build on.  Frenship and San Angelo Central picked up 2-6A wins this evening as well. The Tigers defeated Midland Lee (69-45), and the Bobcats beat Midland High (69-54).

Permian will take a break for Christmas and then prepare for a non-district date with Oklahoma City Storm to close out 2020.  The Panthers (1-0) will return to district action on New Year’s Day with another Friday road game, visiting the Bulldogs (0-1) in the MHS gym in Midland.  Tip set for 6:00 p.m.