MIDLAND, TX – From start to finish, Permian made it abundantly clear there would be no upset by Midland Lee.  The Panthers extended a 46-16 halftime lead to dispose of the Rebels 85-40 in the District 2-6A contest on Friday. 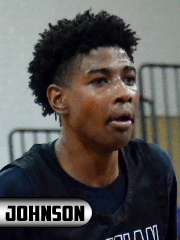 In comparison, Permian had three shooters finish with double figures.  Midland Lee had none, with Shemar Davis leading the Rebels with eight points.  Keyonta Johnson  turned in a game-high 19 to lead all scorers.  Shy-Stephens Deary finished with 18 points, and Nakavieon White added 15.  Mojo made 11 three-pointers to Lee’s three.

The Mojo Machine did more than rev its engine.  The Rebels found themselves in a cloud of smoke. And as each quarter passed, they fell further and further behind.  Stephens-Deary and DJ Johnson each drained a pair of three’s to power a 22-7 first period lead.

Permian kept the hammer down in the second frame.  J.J. Vizcaino joined the three-ball assault, while Stephens-Deary added another nine to the 24-point quarter.  The Panthers owned a 30-point lead at 46-16 at the halftime break.

The Black Cats still had plenty of fuel in the tank in the second half.  The offensive and defensive dominance continued in the third stanza as well.  Keyonta Johnson dropped three goals through the cylinder, while White, Cedric Baty, and D.J. Johnson each added another perimeter three.  Permian uncorked a 15-2 run before Lee was able to close the quarter with a bucket and free throw.  The Rebels’ effort was too little too late as the Panthers now led 65-24 after three.

Lee had its best quarter of the game in the final eight minutes, scoring 16 points.  Unfortunately for the Rebels, Permian reeled off another 18 to dish out the 85-40 defeat in front of the Midland crowd.

The victory punches the playoff ticket for the Panthers (7-0), but the team still has unfinished business in District 2-6A.  The Mojo Machine will crank it up next Tuesday in a road game at Amarillo Tascosa (6-1).  Tip-off is slated for 7:30 p.m.