ODESSA, TX – Preparing for the start of next week’s state playoffs, Permian (from Class 6A) hosted Class 4A power Seminole on Friday.  After taking a 31-9 first quarter lead, the Panthers continued the lopsided affair en route to a 70-46 victory at the PHS Fieldhouse. 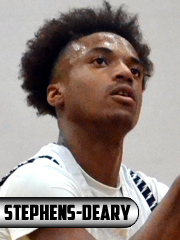 Firing on all cylinders, the Mojo Machine had four players produce double-digit figures.  Shy Stephens-Deary led the assault with 17 points.  Nakavieon White turned in a 14-point night, while Keyonta Johnson finished with 13 and J.J. Vizcaino added 11.  Johnson scored all of his points in the opening stanza.  Permian knocked down four of its eight three-pointers in the first eight minutes.

After the Panthers’ high-energy display in the first quarter, the second period seemed to move in slow motion in comparison.  The Black Cat defense limited Seminole to a mere nine points in each of the first two periods.  While three’s fueled the Indians’ efforts in the first frame, free throws provided five of their nine second quarter points.  Zay Pierce, Sammy Garcia, Race Herr, and Vizcaino balanced the scoring to give Permian a 43-18 halftime lead.

Seminole made a valiant effort at trying to get back in the game in the third frame.  Unfortunately for the Indians, the tandem attack of Stephens-Deary and White kept pace and matched the 13-point third quarter.  Vizcaino scored seven points and Herr added five to led Permian’s fourth period scoring in a 70-46 win.