Odessa, TX – While high school sports has been put on hold, Permian’s girls basketball team will have a new head coach in Keshia Collins the next time they hit the court. 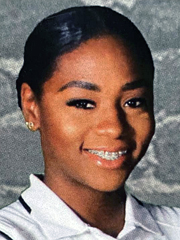 After serving as an assistant girls basketball coach for five seasons, the position with the Lady Panthers will be Collins’ first basketball head coaching job.

Feeling excited and blessed to have this position, the new mentor says this decision felt right. When asked of her expectations, she had this to say, “It will be tough as always, but the ladies that will be returning I feel are extremely talented. I don’t believe that the record truly shows what the young ladies can do. They have hustle and high energy and for me that’s gold!”

Collins adds, “Permian has always had athletes and competitors, even when I’ve played against them. So I know that once we get together and get to work we will make some great things happen. I’m extremely excited!”

She began her coaching career returning to her alma mater as an assistant to coach Wes Torres for two seasons.  The Bulldogs’ head coach and athletic coordinator says Collins will do a great job in her head coaching debut at Permian. “I’m really happy for Coach Collins. Keshia is just a wonderful person and coach.”  Torres notes, “She has the ability to be a tough disciplinarian while being charismatic. All of our athletes were extremely drawn to Coach Collins.“

Ector County ISD Executive Athletic Director Bruce McCrary announced the hire of Collins, who has served as an assistant basketball coach at El Paso Yselta from 2017-19. She has also been the head track coach at Ysleta, but will only coach basketball at Permian.

After graduating from Midland High in 2010, Collins went onto play in Abilene at McMurry University from 2010-14. She finished her career there as the school’s second all-time leader in points, rebounds, and steals. The Midland native was also named All-Heartland second team while playing for the War Hawks.

By the time high school athletes are ready to hit the hardwood later this fall, hopefully things have returned to some resemblance of normalcy.  If so, keep an eye on Collins and our Lady Panthers.