Odessa, TX – In their third scrimmage of the season, Permian rallied in the final frame to claim a 10-8 victory over Lubbock Coronado at the Ratliff Softball Complex on Saturday. 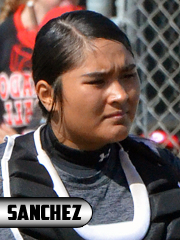 After trailing 8-3, the Lady Panthers answered with seven runs in their last at-bat to take the win.  Mojo went yard twice with a pair of homeruns coming from Makayla Sanchez and Anyssa Cruz.  Sanchez finished the afternoon going 2-for-2 and scoring two runs.  The fence-clearing shot from Cruz put PHS in striking distance.

Madi Martinez got the start in the circle for the Lady Panthers.  Coronado opened the game with a two-run homer and added two more runs before Permian could retire the bottom of the lineup.  Mojo answered with Martinez getting a base hit to left centerfield.  Sanchez sent a one-out blast over the centerfield fence to cut the deficit to 4-2.

A three-run homerun in the top of the second frame gave the Lady Mustangs a 7-2 advantage.  The Lady Panthers went down in order in the bottom half of the inning.

The lead-off batter for Coronado made her way around the bases, but it would cost the next three batters consecutive outs for the score.  Permian was able to match that output with a run of its own in the bottom of the third.  Tiggy Rayos got aboard on a botched pop-up to shallow center.  She was able to advance to second on a fielder’s choice, and then scored on a hard hit ball by Martinez.  The Lady Panthers still trailed by five runs after three complete innings.

Momentum turned in Mojo’s favor in the fourth and, due to time limit, final inning.  The Lady Mustangs went three-up three-down in the top half.  Permian batted around in response, starting with Mackenzei Bernal getting on base.  Sanchez and Alexis Belen would join her to fill the bases with no outs.  Cruz went yard to make it an 8-7 ballgame.

Rayos reached base on an error and scored on a Taylor Ramirez hit to knot the game 8-8.  Excitement filled the dugout as Mojo was threatening to take over the game.  With two on and two outs, Bernal stepped to the plate and placed the ball into open green space for Ramirez and Martinez to score.  The Lady Panthers erased the five-run deficit and took their first lead of the game en route to a 10-8 victory.

The practice/scrimmage games were played by both the Permian and Odessa High varsity and junior varsity teams against Lubbock Coronado and El Paso Montwood.  The Lady Mustangs will be returning on Tuesday for a non-district contest with the Lady Panthers.  First pitch for the Jr Varsity is at 4:30, with the Varsity following at 6:30.