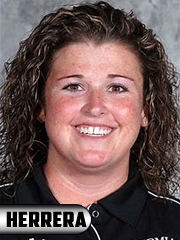 Head coach Gillian Herrera thought the Lady Panthers got off to a slow start in the first set and weren’t able to play ahead.  “We focused on starting strong the next three sets and we were able to play more aggressively.  I like how we responded after the first set.”

Nyxalee Munox led the attack with nine kills, followed by Jade Workman (7) and Bethani Fierro (6).  Denali Cardenas led in team assists with 13.  Workman (7) and Alizay Rivera (6) combined for another 13 assists.  Natalia Abila finished with nine digs, while Anyssa Cruz had five and Iliana Garcia recorded four. Permian dished out the aces throughout the evening. Munoz and Workman each donated five, and Cruz was credited with four.  Workman also logged a pair of blocks in the win.

While this was a non-district game, Coach Herrera says the trip had its purpose. “We have to use the games as stepping stones to get us ready for district because it will be here quickly.”

In sub-varsity action, the Jr Varsity won in three sets and JV Black swept in both of their games. JV White came up a little short, losing in three sets.