Abilene, TX – In a much anticipated district match-up between Permian and Abilene High, the Panthers controlled the game with defense to claim a 64-48 decision in the Eagle Gym on Friday evening.  With the win, the Mojo Machine improves to 5-0 in district play. 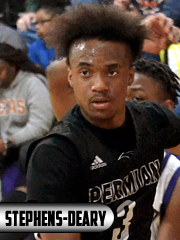 While this evening’s game was far removed from that October 23 night, when the football team came up two points short in a 27-25 loss in Shotwell Stadium to these same Eagles from Abilene High.  It remained obvious at least three of the Mojo players this evening hadn’t completely forgotten the night and looked forward to this righting of a wrong.

Shy Stephens-Deary, a dual-sport athlete of both football and basketball, had no problem bringing his ‘A’ game – just as he had done several Friday nights as a wide receiver.  He led all scorers with a game-high 18 points, while Tremayne Baty backed that up with another 16.  Stephens-Deary is one of three varsity Panthers, including Rodney Hall and Coco McCoy, that played on the turf this past Fall and is now pounding the hardwood.

Head coach Tim Thomas knew the trip to Abilene was going to a worthy test on his Panthers.  “Abilene is a tough place to play/win. I’m really proud of our guys! That played with the mental and physical mettle to overcome, a well coached and tough team, playing on the road, the fans’ comments, no free throws until midway through the third quarter, and the strategy of intentionally fouling to put us on the free throw line 26 times, most in the fourth quarter.”  The ‘foul-a-thon’ approach by the Eagles for a quarter and a half proved ineffective.

The Mojo Machine jumped out to a dominating 11-2 lead, but Abilene High answered with a 7-0 run to narrow the deficit late in the first quarter.  Cedric Baty dropped a long distance trey through the cylinder at the buzzer to close out the period with Permian ahead 14-9.  The host Eagles found it difficult to make any headway the remainder of the half.

The Panthers and Eagles battled back-and-forth through the second frame.  The teams headed to their respective locker rooms with Permian owning a 24-17 edge.

Permian opened the second half on a 12-3 run, as Abilene High was held to the third consecutive single-digit period.  The Panthers managed to extend their lead to 38-22 with just one quarter to go.  In the fourth stanza, fouls and more fouls ruled the final eight minutes as the Black Cats utilized their staple defense to secure the 64-48 victory.

Thomas added, “I thought our team defense was solid and the kids executed our game plan, withstood some strong runs from the Eagles, and earned the win.”