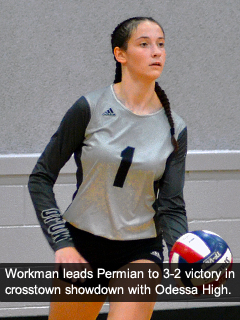 The Lady Panthers and Bronchos remained even through the first half of the opening set.  Permian was able to gain a three-point advantage with Munoz serving for a 14-11 lead.  Mojo took control when Harris dished out an ace and six-point run to push the difference to 21-12.  Odessa High narrowed the deficit on two multiple point serves, but the Lady Panthers were able to snuff the threat and claim a 25-18 first set.

The next three sets would bounce back-and-forth between the two teams and require bonus match points in each.

In the second set, OHS would take a five-point lead at 11-6, but Garcia led a six-point response for a 13-11 Mojo lead.  Four lead changes of no more than a two-point edge eventually left the set knotted at 23-23.  Odessa High caught a break from a Permian miscue and closed the set 25-23.  The third set followed in the same manner for the Lady Bronchos to take a 2-1 match lead.

Five of the first six points in the fourth set came from defensive digs by both teams.  And once again, neither would be able to take a lead of more than two points throughout the set.  The Lady Black Cats gained a 24-22 lead, but OHS answered to knot the set at 25-25.  Anyssa Cruz assisted Mojo in getting the upper hand to take a 28-26 win and even the series at two games a piece.

In the tiebreaker, Cardenas served up the first four points for Permian.  Odessa High started to have some success in a rally attempt, but a crucial dig by Anahi Orona halted the threat at 7-3.  Sophomore Amry Quiroz led a six-point Mojo surge and the Lady Panthers never looked back to claim a 15-6 victory.  Permian picked up a valuable 3-2 district win.

Get ready for sparks to fly as the Lady Panthers play host to Midland Legacy next Tuesday at the Permian Fieldhouse.  The Lady Rebels swept San Angelo Central in the other District 2-6A match today.