Clearwater, Florida – Former Mojo standout Teo Banks hit the cycle as he led Tulane to a 13-5 lopsided victory over Cincinnati in the American Athletic Conference Championship Tournament at BayCare Ballpark on Friday. 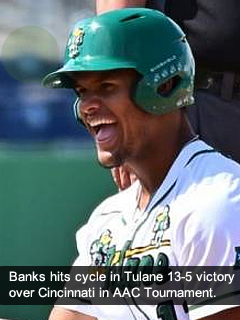 Tabbed the ‘Teo Banks Invitational’ after today’s performance, he became the first player to hit for a cycle in tournament history.  After missing several games due to a thumb injury, Banks uncorked a triple in his first at-bat. He then singled in the second inning, doubled in the fourth, and completed the cycle with a homerun in the eighth.

Tulane jumped out to a 9-0 lead in the fourth inning before Cincinnati could even put any runs on the board. The Bearcats plated two runs and narrowed the contest further in the sixth. A two-run homer brought the score to 9-4.  From there, the Green Wave extended the deficit to 13-4 in the eighth.

The freshman right fielder finished the day going 4-for-6 and scored three runs for the Green Wave while driving in four more runs. Tulane knocked Cincinnati out of the tourney in the elimination game and now face East Carolina on Saturday morning.

The Green Wave will play ECU and must defeat the regular-season champion Pirates twice to advance to Sunday’s Championship.