Odessa, TX – The Mojo varsity volleyball team set the tempo early and rolled to a quick three set victory over Andrews (25-11, 25-7, 25-17) in a non-district contest on Tuesday at the PHS Fieldhouse. 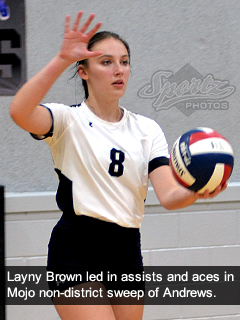 In the first set, Permian rode the successes from the weekend’s Monahans Tournament and jumped out to an early lead.  After maintaining a five-point advantage, the Lady Panthers began to pull away following a Dagmar Ortega kill at 14-6.  Mojo continued to fire on all cylinders with a seven-point run to claim a 25-11 first set decision.

The Lady Panthers roared through the second set in dominating fashion.  While Brown dished out the aces, Addison Sperry provided the blocks.  Ripping off a 13-4 lead, Permian proceeded to put on a show for the home crowd to the tune of a 25-7 victory.

The final set witnessed Andrews’ best effort as the Lady Mustangs stayed within five points of Lady Panthers through much of Set 3.  It would remain close until Mojo extended a 21-16 lead to put the set on ice with a 25-17 win in the non-district contest.

Permian will turn its focus to another tournament, this one across the state in the Metroplex.  Mojo will compete in the Granbury Volleyball Tournament August 18-20.  The Lady Panthers will begin in ‘Pool G’ on Thursday paired with Canyon, Abilene Wylie, and Richland.  There will be another round of pool play on Friday.