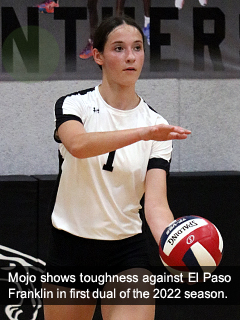 The Lady Panthers faced a familiar foe in the team that knocked them out of last year’s playoffs in three straight sets in El Paso.  This time around, the Lady Cougars quickly found a focused Permian squad was ready to accept the challenge.

In the first set, both teams shook off some early season stiffness.  Franklin nabbed an early 11-6 lead, but Permian responded to draw to within a single point at 13-12.  The Lady Cougars took advantage of a couple of Mojo miscues to continue the upper hand and finish off the first set 25-17.

The Lady Panthers settled in as another back-and-forth affair brought about four lead changes in the second set.  Permian was able to gain a 15-11 edge and hold the advantage until the Lady Cougars knotted the score at 20-20.  The contest remained deadlocked as the set evened at 25-25.  Franklin scored the next two points to win the set 27-25.

Mojo showed tenacity and made an impressive stand in the third set.  Just as the previous two sets, neither team could extend a lead larger than five points.  In the end, it would be the Lady Panthers taking the third set in 25-23.  The final set would stay true to the pattern established all evening.  Down the stretch, the Lady Cougars put together a rally that withstood Permian’s attempt to gain a late surge.  Franklin took the fourth set 25-23 to end the game at three sets to one.

Permian will hit the road on Tuesday and travel to Amarillo for another dual – this time with Dumas and Palo Duro.  A series of tournaments fill the remainder of the August schedule.  Dates against Andrews, Lubbock High, and Monahans are also sprinkled in during the month.