Lubbock, TX – In a rematch between the Permian and Lubbock Monterey, the back-and-forth affair ended with the Mojo Machine claiming a 62-59 decision at The Box on Tuesday evening. 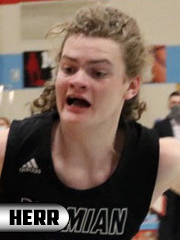 In the first meeting on November 20, the Panthers utilized a 19-point fourth quarter to rally to a 56-47 season home opening victory.  Permian trailed through most of that game until the defense completely shutout the Plainsmen in the final stanza.

In this evening encounter, Permian again fell behind to the well-disciplined Monterey team.  Zay Pierce made an early three-pointer, while Dra McGee and Cedric Baty each dropped in a basket in the opening frame.  The Plainsmen made three treys of their own en route to an 18-point quarter and seven-point lead.

The Mojo Machine came to life in the second period, with Race Herr becoming more assertive around the paint.  Pierce, Herr, and Kyson Moreno sparked a 19-point surge that gave Permian its first lead at 28-25 late in the quarter.  The Panthers owned a 30-29 halftime lead at the intermission.

If fouls had penalty flags like football, you could have easily done a couple of loads of laundry.  Both teams reached the Bonus in each half, with the Plainsmen committing 24 fouls to 22 by the Panthers.  Monterey made 16 of its 23 free throws (70%), while Permian went 15 of 27 from the line (56%).

The game’s host regained the lead in the third frame, but the Black Cats continued to hold their ground and kept pace in the unfriendly confines of the Plainsmen gym.  Cedric Baty made all three of his free throw attempts and added a bucket, while Herr donated a pair of baskets and Moreno rattled in his second perimeter three.  By the quarter’s end, the Panthers trailed by a narrow deficit of 45-44.

The rematch lived up to expectation and became an exchange of scoring runs and momentum shifts in the final eight minutes.  Alternating lead changes continued up until the final three possessions.  Down to the last 12 seconds in regulation, McGee knocked down a basket and followed by making crucial free throws for a 62-59 ballgame.  In desperation, the Plainsmen guard heaved a three-ball from the left wing but it fell short.  The Panthers secured the ball at the buzzer for the three-point victory.  Permian improves to 5-0 for the season.

Tremayne Baty led the Mojo Machine in scoring with 12 points.  Cedric Baty and Herr each contributed 11, with Moreno finishing the evening with nine.  Permian will once again return to the Hub City for a non-district game against Lubbock Trinity on Friday.  The Panthers are going to be a well-seasoned road team by the time their next home game rolls around… and that’s not going to be until after Christmas, when they host the Oklahoma City Storm at the Permian Fieldhouse on December 29.