Odessa, TX – The second playing of the Crosstown Showdown ended much like the first meeting.  While a lower scoring game from the first meeting, the Mojo Machine had no problem dishing out a 72-35 decision over Odessa High at the Permian Fieldhouse on Tuesday evening. 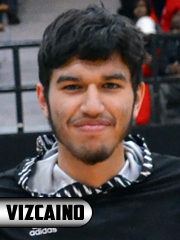 Shy Stephens-Deary led all scorers with a game-high 15 points. Keyonta Johnson finished with 14, while Nakavieon White also recorded double figures with 10 points in his first game back after missing the first half of district play.

Permian spread the ball around more than usual, and drained four three’s from four different shooters in the second frame.  Cedric Baty, Shy-Stephens, Vizcaino, and D.J. Johnson accounted for 12 of the 19 points, while OHS squeaked out seven for a 35-17 Mojo lead at the break.  Baty’s three was shot from the OHS free throw line at the buzzer sounded.

Coach Tim Thomas attributed several elements to the slower start. “Lot of things were going on early from the weather changing the game time to the Educator Appreciation Night, and everything else going on, I think it took a little time for our guys to come out and get focused.  I’ve just been really proud of their effort, their attitude, and their teamwork.”

Permian opened it up in the second half and outscored Odessa High 22-12 in the third quarter.  Keyonta Johnson led the charge with nine point in the third stanza to give the Panthers a comfortable 57-29 lead.  The Mojo Machine added another 22 points in the fourth quarter, while limiting the Bronchos to six the final eight minutes.  Permian was able to double the westside opponent’s output with a 72-35 thumping.

Permian continues to dominate in the District 2-6A standings and will make a trip to Midland Lee on Friday.  Game time is slated for 7:30.