ODESSA, TX – In the second district meeting between the Lady Panthers and Lady Bronchos, Odessa High took advantage of a dismal Permian third quarter to claim a 50-36 decision at the PHS Fieldhouse on Senior Night. 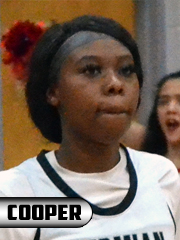 The Lady Panthers remained within striking distance and stayed competitive through the first half.  A three-point third quarter provided the difference in the outcome.  Senior Daysia Christian finished the night with a game-high 15 points.

Odessa High open the game with four consecutive three-point baskets.  Permian was able to answer with a pair of goals in the paint from Christian.  Nodia Cooper and Karen Guzman each added a bucket.  After the first eight minutes of play, Mojo trailed 16-9 to the Lady Bronchos.

The Lady Panthers were successful in cutting into the deficit in the second frame.  Guzman and Jennifer Arnold provided the spark to lead Permian on a 7-2 run.  Turnovers and defense took over to have the Lady Black Cats trail 23-18 at the intermission.

Being the last home game of the season, the five Mojo seniors, their parents and grandparent were introduced to all in attendance.  The Class of 2020 players include:  Christian, Cooper, Jae Savage, Natalie Baeza, and Zae Tiner.

Odessa High stretched the five point lead in the third quarter.  Coach Macee Lane contributed that in most part to the Lady Panthers hurting themselves. “We had a lot of unforced turnovers and bad passes that came back to hurt us.  They took advantage of our mistakes, and we couldn’t do the same.”  Camila Leal knocked a two-pointer down and Arnold made a free throw, while OHS added 14 points.

Trailing 37-21 to begin the fourth quarter, Christian tried to rally the Lady Panthers.  Making a couple goals and six free throws wouldn’t be enough to overcome the 16-point deficit.  Cooper add a bucket and Guzman drained a three, but Odessa High would not surrender the lead in the 50-36 Mojo loss.

Permian will finish off the season with two district road games – at Midland Lee on Friday and at Amarillo Tascosa next Tuesday.  Both games are schedule for  6:00 p.m. tip.