MIDLAND, TX – Despite not firing on all cylinders, the Mojo Machine rolled past Midland High in the District 2-6A clash in the Bulldog Gym.  Permian handed Midland High a 73-57 loss to remain undefeated through the first half of the district schedule. 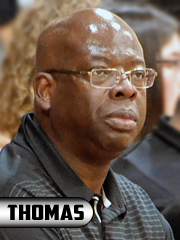 It probably wasn’t be best effort the Panthers have had this season, but Shy Stephens-Deary had no problem lighting up the scoreboard with 35 points to lead all scorers.  Fourteen of those points came in the final quarter.

Head coach Tim Thomas seemed to just take the performance in stride.  “We had somewhat of a let down mentally – with turnovers early, missed free throws, layups, and on defense at times.”, said Thomas.  “But, Midland also caused some of the issues for us tonight. Coach [Shannon] Hooker really had his team playing with energy and executing their game plan.”

Stephens-Deary and Zay Pierce got things rolling for Permian.  Both had baskets drop in the cylinder in the opening quarter.  Free throws by J.J. Vizcaino, Keyonta Johnson, and Stephens-Deary extended the Mojo lead to 37-24 in the second frame.

The Bulldogs manged to outscore Mojo by three in the third stanza.  In response, Stephens-Deary led a 14-2 run to preserve a 10-point cushion for the Panthers.  Keyonta Johnson finished with 12 points, while DJ Johnson provided another 10.

Overall, the Panthers proved why they are atop the district.  In the absence of Nakavieon White and Chase Taylor, freshman Race Herr and sophomore Calvione Calicutt did a good job of stepping in to crash the boards for Permian.  Coach Thomas pointed out, “Anytime you can go on the road and win, you gotta be thrilled!”.

The Mojo Machine will crank it up next Tuesday in the Crosstown Showdown with Odessa High.  The annual rivalry game will be hosted at the Permian Fieldhouse.  Tip-off is slated for 7:30 p.m.