Odessa, TX – Going into Friday’s game, Permian and Amarillo Tascosa were the district’s last undefeated teams.  The back-and-forth affair turned into a 68-40 lashing of the Rebels by the Mojo Machine at the PHS Fieldhouse. 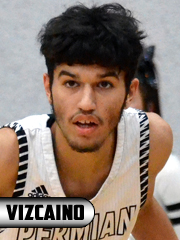 Shy Stephens-Deary led the Panthers with a game-high 26 points.  Keyonta Johnson added 17 points and Cedric Baty had 11 to lead the double figure assault by Permian.  Most of those points weren’t accumulated until the second half.

The opening frame featured a defensive battle with an exchange of jabs between two heavyweights.  Eight minutes into the match, the Black Cats led by one at 11-10.  Tascosa collected the first four points of the second stanza, but the Mojo Machine got rolling midway into the quarter.  A blocked shot by J.J. Vizcaino ignited a bevy of baskets and 15-2 run by the Panthers.  Permian led 26-16 at the intermission.

Permian utilized transition offense and a stingy defense to take over in the second half.  Tascosa managed to fight back to trail by eight, but was unable to get any closer to the remainder of the game.

The Panthers scored 10 consecutive points to build a 32-21 lead midway in the third period.  Stephens-Deary contributed nine in the quarter, and Baty added a bucket and three-pointer as time ran out on the third quarter. Mojo sat on a 45-27 lead.  Johnson led the charge in the final eight minutes with seven more points to secure the 68-40 district win.

Permian sits atop District 2-6A as the lone undefeated team.  The Panthers will enjoy the victory over the weekend, but will set their aim on Frenship come Monday morning.  The Mojo Machine will host the Tigers on Tuesday evening at 7:30 back in the Permian Fieldhouse.