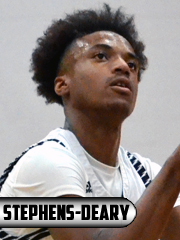 Coach Tim Thomas utilized a Triton spear, consisting of Shy Stephens-Deary, Nakavieon White, and Keyonta Johnson, to grab a quick 30-11 first quarter lead.  Stephens-Deary led with a game-high 22 points.  White finished the night with 19 points, while Johnson added another 16.  On the flipside, when your top scorer can only account for six points, you’re probably in for a long night.  And, a long night it was for San Angelo.  Tyler Pilkinton made a pair of three’s for the Eagles – both in the first half.

The Panthers continued their relentless defensive dominance.  The ugly just got uglier as the game progressed. Taking a 49-16 halftime lead into the locker room, the Mojo Machine showed no mercy in the second half.  The Eagles could only score one single point from a free throw in the fourth quarter.  The Permian defense kept the visitors off of the board the full eight-minute third frame.

JJ Vizcaino and Sammy Garcia each netted a couple of three’s, while Stephens-Deary, White, and Zay Pierce added three more.  The Panthers had a 25-point third quarter and 26-point fourth quarter to secure the heavily lopsided contest.  Jase Taylor had a productive night, completing the double-digit scoring with 10 points.  Calvione Calicutt had a good defensive effort, denying the Eagles from penetrating the lane on several attempts.

Permian will have one more polish-up game before starting district next week.  The Panthers will travel to Van Horn for a Saturday meeting El Paso Pebble Hills.  Mojo will host Midland Lee on Friday, January 17 for the District 2-6A home opener.