ODESSA, TX – Odessa High took advantage of a Permian breakdown in the third quarter and held off a fourth quarter Mojo surge to hand the Lady Panthers a 61-46 district loss.  The crosstown rivalry game was held on Tuesday at the OHS Fieldhouse. 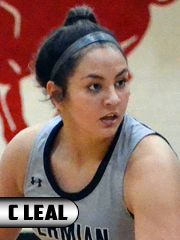 For the second consecutive game an opponent has held forward Daysia Christian to single-digit points.   It was Camila Leal that provided the team-high scoring for Mojo with 10 points.  Perhaps the more notable scoring effort for Permian came from Jae Savage.  The senior guard led the charge in the fourth quarter with eight points.

After an exchange of three-balls to open the game, the Lady Panthers put together a 6-0 run and took an early lead.  The Lady Bronchos came back with eight points of their own to take a 15-12 lead by the end of the first quarter.

Permian’s aggressive nature played nemesis as Christian and Karen Guzman found themselves in foul trouble midway into the second frame.  Leal tried to pick up the slack, but was held to pair of three’s.  The Mojo defense kept the game close.  Odessa High enjoyed a slight advantage as intermission came with the home team up 27-20.

The Lady Panthers came out flat in the third frame.  Shots would not fall, and the transition defense was unable to stop the dribble of the Lady Bronchos.  Before the quarter ended, Odessa High managed to score 19 points to Permian’s six and extend the lead to 46-26.

Permian refused to let the difficulties of the third period carry over into the final eight minutes.  Led by Savage, the Lady Black Cats were able to cut the OHS lead in half after going on a 12-2 run.  Odessa High was able to maintain the double-digit deficit and preserve the win.

The Lady Panthers now turn their attention to Amarillo Tascosa.  The tip-off is set for Friday at 6:00 p.m. in the PHS Fieldhouse.  Permian remains tied for third place in the district standings.