Odessa, TX – The upset minded Bronchos were awakened to reality early.  After jumping out to a 25-4 lead, the Mojo Machine disposed of Odessa High 89-48 in the OHS gymnasium on Tuesday. 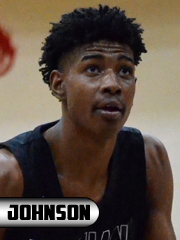 Head coach Tim Thomas thinks the Panthers are still on pace to achieve their goals. “I thought the kids came out focused and executed the game plan for probably one of the best halves of basketball we’ve played this year”, said Thomas.  “We lost a little edge in third quarter, but OHS play had a lot to do with it as well. Overall, I was really proud of our effort, teamwork, and intensity.”

Permian has jumped out to a 17-4 lead behind three three-pointers by Stephens-Deary in the opening frame.  K. Johnson added six and J.J. Vizcaino made another bucket to up the tally and give the Panthers a 25-4 first quarter lead.  Taylor’s hot hand in the second stanza led to a 46-13 halftime stretch for the visiting Black Cats.

Odessa High came out and showed some life in the second half.  The Bronchos outscoring the Panthers 17-13 in the third quarter.  That success would be short lived as the Mojo Machine cranked out a 30-point fourth quarter to put the rally attempt to rest.  K. Johnson dropped another five goals into the cylinder the final eight minutes of play.  The Permian defense forced 26 OHS turnovers and knocked down a total of seven three’s.

With the 89-48 victory, the Panthers improve their season record to 20-2 and 2-0 in district.  Permian will host the other district unbeaten, Amarillo Tascosa, on Friday at the PHS Fieldhouse.  Come check out the Mojo Machine Roll Over A Rebel.  Tip-off is slated for 7:30.