Ligaments are elastic bands of tissue that connect bones to each other and provide stability and strength to the joint.  Sports injury prevention isn’t a one-stop shop, especially for injuries like ACL tears, which are four to eight times more common among women than men. 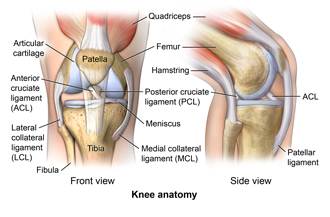 The four main ligaments in the knee connect the femur (thighbone) to the tibia (shin bone), and include the following:

Cruciate ligament injuries
The anterior cruciate ligament (ACL) is one of the most common ligaments to be injured. The ACL is often stretched and/or torn during a sudden twisting motion (when the feet stay planted one way, but the knees turn the other way). Skiing, basketball, and football are sports that have a higher risk of ACL injuries.  The posterior cruciate ligament (PCL) is also a common ligament to become injured in the knee. However, the PCL injury usually occurs with sudden, direct impact, such as in a car accident or during a football tackle.