Odessa, TX – While Ratliff Stadium was being occupied with the West Texas Relays, both varsity soccer matches against Frenship were hosted on the Ratliff South field.  The early contest between the Lady Panthers and Tigers ended in a scoreless tie.  The Mojo guys avenged an earlier district loss by dishing out a 4-1 win in the nightcap. 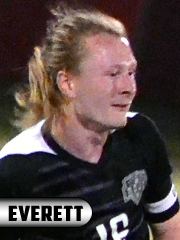 Permian’s Aiden Everett came up with bookend goals for the Panthers to improve their record to 5-3 in district.  After Frenship committed a foul early in the first half, Everett sent the free kick past the goalkeeper and between the posts with 33:21 in the first half.  Everett picked up an assist on Mojo’s second goal.

Approaching the midway point in the half, Permian was back on the offensive.  Everett outplayed a Tiger defender in the right corner, and sent a cross to an open Reese Rivera who buried a kick into the back of the net to extend the lead to 2-0 with 25:55.

Frenship managed to get on the board and cut the lead back to one seven minutes later.  Jon Olivarez received a pass from the right side of the line, and sent the kick just past Carson Roberts to narrow the deficit to 2-1.  The first half would end with Mojo possessing the one goal lead.

The Permian defense shut Frenship down in the second half while adding two more goals.  Amari Everage uncorked a 45-yard missile six minutes into the half, and Everett finished the scoring on a goal midway into the final 40 for the 4-1 decision.

The Panthers will host Midland High on Tuesday back in Ratliff Stadium.  Permian currently sits in third place with 20 points, while the Bulldogs are in second with 22.  With just two district game remaining, Mojo can take over second with a win and position themselves into striking distance of OHS (24).

In the afternoon match, the Lady Panthers not only kept their playoff hopes alive but proved they can compete with anyone.  Permian held previously unblemished Frenship to a scoreless tie.  The feat snuffed out a 37-game district win streak by the Lady Tigers.

The Mojo ladies will also be back in action on Tuesday, taking on the Lady Dawgs from Midland.  The girls will take the field at 5:30, and the boys will follow at 7:30.  The Lady Panthers definitely have the momentum going into the contest.