Odessa, TX – The District 2-6A home opener for Permian ended up being a very competitive back-and-forth affair with Abilene High.  After dropping the first set of the contest 21-25, the Lady Panthers came back to win 25-20, 25-22, 26-24 in the PHS Fieldhouse on Tuesday. 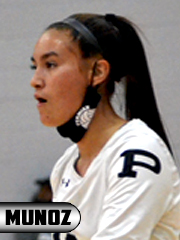 Nyxalee Munoz once again led the Mojo assault, finishing with 13 kills, followed by Anahi Orona with 10 and Jade Workman with seven kills.  Workman led the team recording 16 assists and Denali Cardenas added 13.  Iliana Garcia and Anyssa Cruz each contributed six in the victory.

Natalia Abila dished out 14 digs, while Workman had 11.  Several Lady Panthers were credited with aces, including seven by Cardenas. Workman, Munoz, and Garcia each had three.

Bethani Fierro had the solo block for Permian.  Mojo will continue the Mission Possible tour on Friday with a trip to San Angelo Central.