Odessa, TX – Permian put together a great team effort in the sweep of Amarillo Palo Duro  (25-13, 25-17, 25-22) on Tuesday in the PHS Fieldhouse.  The Lady Panthers jumped out early and often in the lopsided contest celebrating Senior Night. 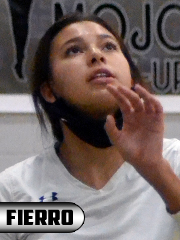 Mojo Mission Possible crew honored their captains Natalia Abila and Bethani Fierro, along with Alizay Rivera and Monica Hinojos.  According to the senior captain, Fierro thought the Lady Panthers played really well as a team. “We finally got our rhythm going and we definitely came to play. Senior Day was different this year since we decided to have it early, but it was still special and emotional.  As seniors, we never know when our last game could be. From the match, it gave us an opportunity to try new things and we did a really good job on finishing, which hopefully we can continue to keep doing.”

Nyxalee Munoz led the assault with nine kills, followed by seven from Jade Workman and six from Anahi Orona.  Bethani Fierro (5), Cianna Harris (4), and Sarahi Orona (3) also contributed to the team’s 34 kills. Denali Cardenas led in team assists with 14, while Workman finished with 12.

Natalia Abila had nine of Mojo’s 84 digs.  Cardenas logged six digs, as Anyssa Cruz and Iliana Garcia recorded five more each. Permian dished out 13 aces throughout the evening. Workman accounted for four, Cruz and Rivera were credited with three, and Munoz added two.

Anahi Orona and Workman were officially rewarded with a block each… even though there should have been more credited, especially in the second set.

In sub-varsity action, the Permian Junior Varsity, JV Black, and JV White all won their matches in two sets each.  Permian’s dual meet with Cooper and Wylie this coming Friday may be canceled with word of positive cases being reported in Abilene.  Will post as more information becomes available.