Odessa, TX – Summer 7-on-7 football got underway Monday at the Ratliff Sports Complex.  Area teams competed in the second of four weeks of the Odessa league with the Permian varsity winning all three of its games. 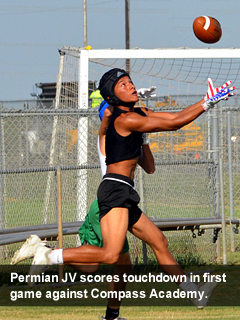 The varsity teams from Odessa High and Permian went unbeaten in this evening’s action.  Each team played three pool games in a round robin format.  Permian was paired with Kermit, Odessa High II (JV), and Monahans.  In the second pool, Odessa High was grouped with Midland, Permian’s JV, and Compass Academy.

While Permian opened with a 21-0 decision over Monahans, Odessa High dished out a 21-7 loss to Midland.  The Panthers rolled past Kermit in a 42-14 lopsided second game.  At the same time, the Bronchos were able to hand Compass Academy a 21-7 loss. The Mojo and OHS varsity teams completed the evening with wins over the opposing team’s JV squad.

The Yellow Jackets won two of their three games to finish 2-1 for the day.  Midland would finish with the same record.  After suffering a loss to begin the day, they rebounded and won by a touchdown in each of their two remaining games.

As the local summer league hits its halfway point, the Mojo varsity and junior varsity will be back to action the next two Mondays on the Ratliff Sports Complex south fields.