Odessa, TX – The Chicago Cubs selected Permian graduate Teo Banks in Round 12 of the 2021 Major League Baseball draft on Tuesday.  While honored by the news, Banks still plans to attend Tulane University this Fall. 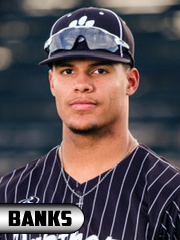 As a Green Wave signee, he says he’ll continue his plans to take the collegiate path as his next step. “After talking with my family and having many thoughts and prayers, I want to thank the Chicago Cubs organization for the opportunity. But, I have decided that Tulane University is the right decision for me.”  Banks reiterated his appreciation of family support.  “I thank my family for helping me through this process and being there for me.  They mean so much.”

The discussion on the Tulane decision continued.  According to Banks, “I felt that college was the right decision for me. It has been a dream come true for me to get drafted out of high school.  It’s every kid’s dream to one day play Major League Baseball.  But in the long run, I feel that going to college first to develop my game – mentally and physically – is the best choice.”

To be expected, when asked about how she felt about the announcement, Teo’s mother Robbi said she was excited for him.  “He was faced with the tough decision of accepting the draft with the Chicago Cubs or pursuing his college degree while playing baseball for Tulane. We support Teo in this tough decision and look forward to seeing him at Tulane. We are also hopeful that he will continue to develop his skills and re-enter the draft in years to come.”  She was also thankful for the outpouring of support.  “Thank you all for supporting our son throughout the years and we hope you will continue to root him on.”

Banks was recently named as a First Team member of the Class 6A All-State team by the Texas High School Baseball Coaches Association. He was also recognized as ‘Most Valuable Player’ of District 2-6A. Banks maintained an impressive .393 batting average with 33 RBI’s in the 2021 season. He was also a major contributor to the successes of the Mojo baseball team.  The Panthers finished the season with a 30-10 mark.  They were District, Bi-District, and Area Champions, as well as Region I Quarterfinalists in the Class 6A State playoffs.

The Tulane-bound 6’3″ 190 pounder wanted to also give recognition to his coaches.  “I am thankful for all of the coaches that have helped me, especially Coach (Tate) Criswell for really being there and changing the Permian baseball program around to one of the best in Texas.”