Odessa, TX – The Ector County ISD has promoted Steven Flores to take over head coaching duties of the Permian Boys Basketball program.  He has served as assistant coach the past four seasons for the Mojo Machine. 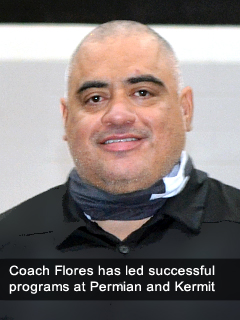 Asked about being named as the new head basketball coach, Flores began by saying, “First of all, I have to give thanks to the good Lord above. Without Him and my father looking over me daily, none of this would be possible. I’m ecstatic to get the opportunity to coach the Permian Panthers and to coach at the highest level in the state of Texas. I can’t wait for the school year to begin so we can hit the ground running!”

The Panthers will enter the 2021-22 season with quite a bit of optimism. The varsity earned a 12-2 district record (19-6 overall) and finished this past season as Area Round finalists in the state playoffs. The Permian junior varsity, under Flores’s tutelage, recorded an impressive 20-1 effort. Expectations will remain high according to Flores, “I will always have high expectations for every team under myself and my staff. We want to be the best year-in and year-out! But, that comes with hard work every single day to get the team better! As long as we compete hard on the court (and in the classroom), we will be successful as an overall program.”

Flores received his Bachelor of Arts degree in Communications from Sul Ross University.  Upon graduation, he embraced his first coaching assignment by serving six years as an assistant coach, before earning the head coaching job at Kermit High School. In his inaugural season at the helm, the Yellow Jackets scored their first playoff victory in 20 years.

The Monahans High School graduate of 1997 was also head coach for Kermit during former Mojo coach Tim Thomas’s first year at Permian. In a non-district preseason game, it was Flores and his Jackets that came out on top in the contest between the two schools.  That same season, Kermit would go on to claim the District Champion title.

Under Flores, the success would continue for the Yellow Jackets.  They would win in the Bi-District Round of the state playoffs in 2013.  Kermit recorded a 25-6 record during 2014.  The last two years at Kermit, Flores guided impressive runs that drew statewide attention.  The Jackets remained in the state’s Top 10 rankings throughout most of the 2015 season.

Kermit would duplicate that performance in 2016, receiving a ranking as one of Class 3A’s Top 5 teams in Texas.  The Yellowjackets finished the season producing a 23-2 record.  Heading to MojoLand afterward, Flores logged a 102-26 win-loss mark as the head coach for the Maroon and Gold, including making three consecutive appearances in the 3A Region I Quarterfinals.

The Panthers have made six consecutive playoff runs of their own these past few seasons, including winning three district titles to their name.  With hard work and Flores’s leadership, expect the Mojo Machine to continue to roll in 2021-22… and beyond.  Permian’s basketball teams will be bringing the heat to the PHS Fieldhouse come November.  “One of our goals is to make it to San Antonio,” according to Flores.  The Class 6A state tournament will be held in the Alamo City tentatively March 2022.