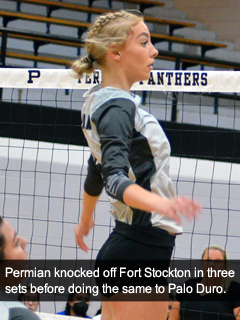 In the first dual, the Mojo varsity came out sharp and maintained that focus throughout much of the match. After claiming a 25-16 first set, Permian and Fort Stockton each had their exchange of runs in the second. The Lady Panthers took control late to reel in a 25-18 decision. They would follow with a dominating 25-13 third set.

Jade Workman led Permian with 11 kills and four digs.  She also recorded 14 assists, while Denali Cardenas led all players with 18 assists.  Nyxalee Munoz had a solid outing, adding nine kills, four digs, and three aces.  Anahi and Sarahi Orona each contributed five digs and Cianna Harris had a pair of blocks in the sweep of Fort Stockton.

After a short intermission, the Lady Panthers went back to work.  Permian continued to dominate the court.  Workman once again led in kills with 13, and Munoz backed that up with another six.  Iliana Garcia stepped up her game with 10 digs, with Cardenas added seven.

The Lady Panthers were able to control all three sets against Palo Duro, as well.  Mojo will look to build on today’s successes with a pair of tournaments to close out the week.  Three of the four Permian volleyball teams will make the drive west down I-20 to compete in the Monahans Tournament this weekend.  JV Black is slated for a road trip north to the Lubbock ISD Tournament.