Monahans, TX – After picking up three wins in Pool B on Friday, the Lady Panthers reeled off another three wins before falling in the championship game of the 47th annual Monahans Volleyball Tournament on Saturday at the Jerry Larned Sports Complex. 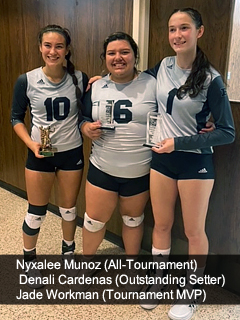 The Lady Panthers opened the Gold bracket with a win over Canutillo (25-20, 25-14). They would follow that with a convincing victory over Midland Classical (25-12, 25-12) to get one step closer to the championship game. A 25-9 and 25-12 decision over Midland Legacy’s JV placed Mojo in the bracket final against Midland Greenwood.

While winning three of the pool games yesterday, Permian suffered its lone loss of the day to those same Rangerettes.  The first set of the highly contested rematch ended in a 25-23 advantage in Greenwood’s favor.  A back-and-forth affair would end up giving way to the Rangerettes’ liking to claim the tournament championship title with a 25-20 margin.

A busy week lies ahead for the Lady Panthers as all four teams will be on the road on Tuesday in Andrews. Another round of tournaments will close out next weekend, August 19-21. The Mojo varsity will be competing in the tourney in Granbury, while the junior varsity will be in Littlefield. JV Black and JV White are slated for a road trip to Abilene on August 21.