Odessa, TX – It would take a pair of overtime periods to decide who would be the district’s lone remaining undefeated and sit atop 2-6A.  Permian and Frenship battled to a 52-52 draw at the end of regulation, but the Tigers added one more point in the second overtime for a 63-62 decision on Tuesday evening in the PHS Fieldhouse. 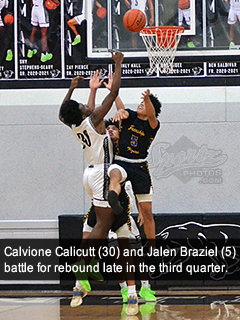 Midway in the opening frame, it became evident that all in attendance were witnessing the district’s best on the hardwood and a blow out victory probably wasn’t going to happen… for either side.

If you were isolate a single element in deciding the outcome of the game, one could easily assess that to be the success from the charity line.  Both teams made 18 free throws over the 40 minute span.  Frenship was able to achieve that in its 24 attempts (75%), while it took Permian 30 (58%) tries from the line.  Failing to take advantage of those 12 missed FREE opportunities for the Panthers – in a one-point ballgame – did matter.  They might not have solely decided the game, but certainly it did not help missing so many.

Shy Deary and Race Herr shouldered the burden of scoring for the Panthers in this district showcase game.  Deary turned in a game-high 33 points, while Herr backed that up with another 14.  The teams were statistically even in assists with Frenship having a slight edge in rebounds (43-37), and Permian finished with more steals (12-8).  Mojo also led in block shots with five.

The Mojo Machine looked on course to having the upper hand after taking a 11-7 first quarter lead behind Deary’s first six points.  Shots wouldn’t fall and arid passes resulted in Frenship surging and taking the lead in the second frame.  Jalen Braziel and Tracy Godfrey led the Tigers in a 19-point effort to send the teams into intermission with the Panthers now trailing 26-16.

The Black Cats came roaring back in the third quarter, chipping away at the 10-point deficit to get into striking distance at 36-33 by the end of the period. Deary accounted for nine of the 17 Mojo points, and Tremayne Baty made three of his five free throws.  Devin Hartfield dropped in three buckets for the visiting Tigers to maintain the narrow edge as the fourth quarter arrived.

The back-and-forth affair witnessed three lead changes.  Hartfield and Deary brought both sides of the Fieldhouse to their feet throughout the fourth stanza.  As time ran short on regulation, Frenship’s Jeb Smallwood squeaked in a trey to once again deadlock the game, this time at 52-52.

In the first overtime, each team added five points to the scoreboard.  Cedric Baty, Deary, and Herr each went one-for-two at the free throw line and another Mojo basket had Permian smelling victory.  With just seven ticks remaining, a pair of free throws by Frenship’s Tajavis Miller tied the game at 57-57. Firing another buzzer beating shot (similar to last year’s meeting), Deary’s attempt wouldn’t fall to force a second overtime four-minute period.

The Tigers scored the first four points of the second overtime to regain a lead.  Deary made a clutch bucket plus one to narrow the difference back to a single point. The Panthers climbed back on top 62-61 when Deary sent a shot through the cylinder with 15 seconds remaining.  Frenship was able to break the press and got to midcourt.  Miller worked into open space and penetrated the lane for a layup to fall with under five seconds left.  Permian was unable to answer when a half-court shot wouldn’t go.

The Panthers (13-4, 5-1) will kickoff the second half of district on Friday against the Little Red Ponies from across town.  Mojo will host the 6:30 p.m tip-off back in the Permian Fieldhouse.  Odessa High (9-7, 1-5) lost to San Angelo Central tonight by a 67-61 tally.  The Bobcats travel to Midland High, while Midland Lee visits the Tiger Pit.
[District 2-6A Standings]