Odessa, TX – The Panthers got back into the saddle of winning by riding the Odessa High Bronchos to a 76-61 decision on Friday evening in the Permian Fieldhouse.  After battling through a good quarter and a half of play, the Mojo Machine opened it up and never looked back in the district win. 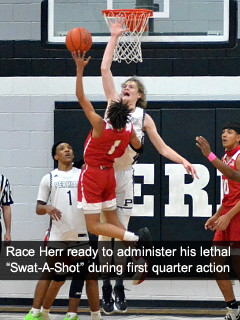 While it was an entertaining half of basketball, the outcome was never really in doubt.  Shy Deary and Race Herr put on a clinic and led all scorers with 25 and 22 points, respectively. Herr was also responsible for four of Permian’s eight treys.

In our post-game talk, head coach Tim Thomas felt a little better about tonight’s game compared to Tuesday’s double overtime shootout.  “It’s a nice bounce back from a big disappointment the previous game. We played a lot better offensively, better at the free throw line, and shot the ball better from the 3-point line. We are still a work in progress with lots of room to improve.”

The notable improvements by the Panthers included making 14-of-18 from the free throw line and knocking down 53 percent (27-of-51) of their shots.  While Odessa High relied heavily on three shooters, Permian did a better job of spreading the scoring production around.  The Mojo Machine had 10 different players donate marks in the scorebook, and the team effort also netted 19 assists.

The Black Cats did a better job of crashing the boards, recording 27 rebounds – nine offensive and 18 defensively.

In the opening frame, an exchange of three-balls set the tempo with the Panthers dropping four and the Bronchos adding three.  Permian was able to build on the 19-15 first quarter lead with Herr contributing nine points in the second.  While the visiting Bronchos managed to stay in the game, the Black Cats sat on a 32-24 halftime advantage.

Odessa High came out in the third frame and cut the deficit down to 12 points. From there the Mojo Machine opened it up and left the red ponies in a fog. Permian closed the quarter up 55-40, which included making all nine of its free throw attempts.  OHS failed to gain any traction in the final eight minutes, giving the Black Cats a 76-61 district win.