Abilene, TX – Permian brought the Mojo in the first half to take a 17-7 lead, but the magic dwindled away as Euless Trinity scored 21 unanswered points in the fourth quarter.  The Panthers’ Class 6A Division I playoff run came to an end as the Trojans handed out a 28-17 decision at Shotwell Stadium. 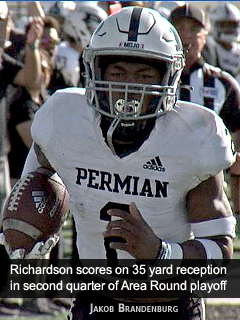 Entering the contest as 14-point underdogs, the Panthers made their presence known right from the opening kickoff.  Permian put together a 9-play, 75-yard touchdown drive that chewed up five minutes of clock.  An 11-yard TD scamper by senior Brian Mahaffey gave the Black Cats the lone score of the first quarter for a 7-0 lead.

After the Mojo defense partially blocked a punt, Permian took over in Trojan territory.  On the ensuing play, Jaquan Richardson gathered in a pass to the right flat and rambled down the field for a 35-yard touchdown catch-and-run to push the tally to 14-0 early in the second stanza.  Euless immediately responded with a 65-yard TD run by Ollie Gordon to cut the deficit to 14-7.

A Mojo miscue near midfield left the door open for Trinity to even the score.  Luckily, the fumble would be neutralized nine plays later.  On a 4th-and-17, Permian’s Jayden Pruitt nabbed a Trojan pass to snuff out the threat.  With time winding down on the half, Tate Terry’s 27-yard field goal capped off an 11-play possession.  The Panthers sat on a 17-7 lead at intermission.

Defensive play by both teams dictated the third quarter.  The Trojans opened the second half with three plays and a punt.  Hoping to build on the successes of the first half, Permian was unable to complete the task and was also forced into a three-and-out.  Trinity’s second drive brought both sides of the field to their feet.  A sustaining drive that began on their own 4-yard line ended in the Mojo redzone.  After the Black Cat defense bowed up to deny the Trojans from the endzone, a 23-yard field goal attempt went wide and the Panthers’ 10-point lead stayed in tact at the quarter’s end.

Things would start to unravel for Permian as the final 12 minutes began to unfold.  A 53-yard run for the Haka landed the Trojans in Mojo territory.  An 8-yd TD pass narrowed the deficit to three points.  Disaster followed as momentum clearly was shifting.  A quarterback sack afforded the ball to hit the turf, where a Trinity defender scooped it up and made it across the goal line for the Trojans to take their first lead of the game at 21-17.

Failing to move the ball as valuable ticks came off of the clock, Permian was forced to punt the ball away two more times.  The Panthers were limited to one first down and a net 18 yards of offense in the fourth quarter.  The Metroplex representatives scored the game’s final touchdown with under two minutes to play to secure the 28-17 final.

Mahaffey led the Mojo ground game, collecting 71 yards on four carries and scoring the game’s first TD.  Caysen Clinton finished with 15 touches for 43 yards, while Richardson hauled in three catches for 72 yards through the air.  He also added a touchdown.  Pruitt recorded the lone interception of the game.

Permian finishes the season with an 8-4 record, while Euless Trinity improves to 11-1.  The Trojans will face the Allen Eagles (10-2) in the 6A Division I regional game next week.  The focus for the Panthers will now shift to the basketball court, where the Mojo Machine (3-0) is just getting its season underway.