El Paso, TX – JaQuan Richardson and Rodney Hall accounted for five touchdowns in the Class 6A Bi-District game between Permian and El Paso Franklin on Friday evening.  The Panthers advance to the Area Round of the state playoffs with a 56-28 victory at Cougar Stadium. 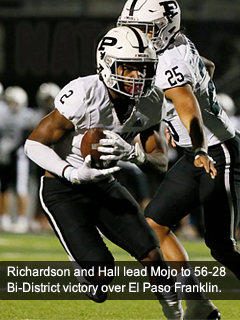 Permian jumped out early in the opening 12 minutes, but the Cougars fought back to trail by a touchdown at the break.  The Mojo defense took over in the second half, holding Franklin scoreless in final two quarters.

The Panthers opened the game by reeling off four plays that covered 60 yards for a quick 7-0 lead.  It featured Richardson hauling in a Rodney Hall 47-yard touchdown strike.  On the ensuing possession, the Cougars knotted the game after converting a 4th-and-10 on the Mojo 13.  Richardson would find the endzone the next two set of downs from 11 and five yards out for a 21-7 Permian lead.  Hall connected with Richardson for the fourth TD in the quarter on a 58-yard catch-and-run.

Leading 28-7, the Black Cats watched the Cougars score three times in the second frame to get back in the contest.  Franklin’s Cameron Byrd threw a pair of TDs of 68 and 21 yards to narrow the deficit.  Hall scored a rushing touchdown for the Panthers to take a 35-28 lead into intermission.

Permian’s defense forced the Cougars into a one-dimensional offense that was unable to rely on the passing game, which also allowed for the Black-and-White to pin their ears back and pressure the quarterback.  Meanwhile, Hall added an 8-yard scamper in the third stanza.  Caysen Clinton added a short TD run and Richardson added his fifth touchdown to the tally on a 58-yarder for the 56-28 win to open the playoff run for the Panthers.

Hall turned in a solid performance, passing for 217 yards and rushing for 129.  Richardson finished the game with three receptions for 177 yards, plus 26 rushing yards.  The pair teamed up for three touchdowns, and each added two of their own.  Clinton rushed 15 times for 61 yards and a TD, while Brian Mahaffey added 55 from four touches.  Corey McCoy collected a pair of interceptions for the defense.

Permian will face Euless Trinity next Saturday in the Area Round playoff at Abilene’s Shotwell Stadium.  Kickoff time is slated for 2:00 p.m.  The Trojans won 47-21 over Keller tonight.