Hewitt, TX – In a game that mimicked more a 7-on-7 show of offense than a typical evening under the Friday Night Lights, Permian outlasted Waco Midway 57-41 in a slobberknocker at Panther Stadium. 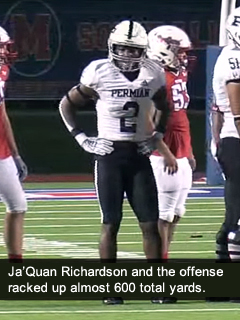 It would be the aerial antics of Ja’Quan Richardson and Rodney Hall that would dominate the highlight reel.  Richardson hauled in three touchdown passes, while Hall would not only throw those daggers but also add three more rushing TDs to boot.

While the opening quarter provided no score, two lengthy drives would end in turnovers inside the opponent’s 5-yard line.  In Midway’s first drive of the game, Dominique Hill coughed up the ball on the Mojo 4.  Bryce Woody would recover the loose pigskin.  After an exchange of punts… there were only two and both came in the first quarter… Permian would put together a 7-play, 62-yard drive before putting the ball on the turf at the Midway 2.

There would be six lead changes in the second quarter alone.  Midway would be first to get on the scoreboard on a 6-yard TD run.  The following extra point would be blocked and Woody returned it coast-to-coast down the right sideline to result in a 6-2 deficit.

The two heavyweights would exchange knock-out punches the remainder of the quarter.  The exchange would include Hall tacking up the first Permian offensive points on a 50-yard scamper.  Not to be outdone, Midway answered with a 59-yard TD run by Dhamir McDonnaugh.  Richardson, a junior, nabbed a 19-yard TD pass to cap off a 12-play Permian scoring drive.  Next, a 47-yard kickoff return would lead to Midway regaining the lead when quarterback Reid Tedford scored from 11 yards out.  Back came Mojo.  After throwing a 33-yard pass, Hall reeled off a 32-yard touchdown run to give Permian a 23-20 lead.  Midway was able to score one more time to take a narrow 27-23 advantage into intermission.

There would be five possessions between the two Panthers in the third quarter.  That would result into four more touchdowns and an interception.  Permian went on offense to start the second half on their own 30.  After two short gains,  Hall found a streaking Richardson to launch a 73-yard catch-and-run for Permian to take a 29-27 lead.  After the missed extra point, the heavyweights continued throwing haymakers.  A 6-play, 70-yard drive by Midway again allowed them to regain the lead.  Permian responded with a 6-play scoring drive of their own, which included a 55-yard strike to Deonte Bass and 19-yard TD reception by Richardson.  His third touchdown catch of the game.

Permian gained the upper hand on the next series as Kayden Baze snuffed out the Midway scoring threat, picking off a pass at the Mojo 2 and returning it to the 27.  A 73-yard scoring drive would be capped by a 14-yard Tristan Johnson trot to paydirt to finally give Permian a nine point lead at 43-34 to end the third quarter.

Midway stayed in the fight and delivered another solid right-cross when Tedford connected with Thornton on a 66-yard strike.  On the ensuing kickoff, Richardson uncorked an 80-yard return into the endzone, but it would be negated by a penalty.  Mojo would turn heavily to the ground game to eat some clock and control the game’s tempo.  The Permian offense put together a 4-play scoring drive, and the defense was able to finally back that up by denying Midway entrance back into the endzone.

Johnson capped the next drive with a short touchdown run to secure the 57-41 road victory.  Hall finished the night rushing for 173 yards and passing for another 231.  Johnson had three carries for 97 yards.  Richardson’s three receptions were all touchdown catches that accounted for 111 yards, and he had an 80-yard kickoff return erased.

Permian (2-0) will return to the home confines of Ratliff Stadium next Friday when they host former district foe Amarillo Tascosa (1-1) on September 10.  The Rebels fell to Midland Legacy in a wild one, 51-48.  Kickoff is slated for 7:00 p.m.