Odessa, TX – The Lady Panthers played their last scheduled non-district game on Tuesday and finished with a strong three-game sweep of Pecos (25-9, 25-12, 25-16) at the Permian Fieldhouse. 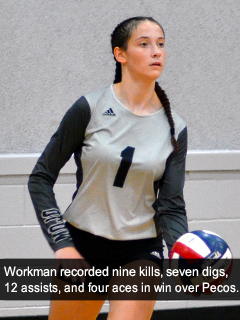 It may not have been the top effort of the season, but still consistent play by the Lady Panthers.  Permian maintained control of all three sets.  The opening round watched Mojo take the driver’s seat and reel out a 25-9 first set.

In the second stanza, the Lady Eagles made a valiant effort but couldn’t keep pace with the Lady Panthers.  Permian took command behind a strong defensive stance to take a 25-12 two-game advantage.

The Mojo girls stayed the course in the last round to claim a 25-16 final set to close out the non-district slate of games.

With the win, Permian improves to 23-8 for the season.  The Lady Panthers will spend the rest of the week preparing for the District 2-6A opener against Odessa High.  The meeting is scheduled for next Tuesday across town.