Odessa, TX – After a successful collegiate and semi-pro career in football, coach Jack Jacobson made a lasting impression on the Permian football and golf programs.  At the age of 80, Coach Jack passed in Dallas on September 5. 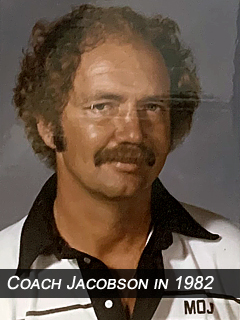 Upon his father’s passing, Jacobson’s son Scott has spoken with legendary coach John Wilkins, state champion coach Tam Hollingshead, and former Permian standout Brian Vickers, all of which had their own ‘Coach Jack’ stories. “On the call with Coach Wilkins, he lamented playing basketball shooting games with my father. Laughingly, he said Dad would make 15 straight, you never got to shoot.”

Truly, he would win at whatever game it was… and make it look easy while doing it according to his son. “They all said he was a great coach, and one of the best they worked with.”

Born in Ardmore, Oklahoma in 1941, Jack Clifton Jacobson enjoyed a remarkable career in multiple sports as an athlete.  He would utilize that knowledge and share it with several young Panthers throughout the 1970s and into the 1980’s as a Permian coach.  Jacobson left a legacy as an accomplished athlete, mentor, and valued member of the Mojo family.

While in Oklahoma, Jacobson excelled in all athletics and played football and golf for his father, who was head coach and later voted into the Oklahoma Coaches Hall of Fame. The gifted 6-2, 200 lb. defensive back lettered in football at Oklahoma State three of the four years there – 1962, 1963, and 1964. He played with a team of 28 or 29 survivors of a Paul “Bear” Bryant protégé in new coach Phil Cutchin’s tenure. According to Scott Jacobson, “My father, Walt Garrison, Jim Click, and a few others continued through those rigorous workouts and made the team.”

Jacobson earned All Big-Eight honors and was a Senior Bowl participant.  A notable credit to his abilities, during that game Joe Namath (future New York Jets hall-of-fame quarterback) made attempts to throw to Bob Hayes (future Dallas Cowboys all-star receiver) but was never able to complete a pass on Jacobson’s side of the field through the four quarters.

Upon graduation in 1965, he was selected in the 13th round of the National Football League draft by the Detroit Lions. Instead, he would opt to take an offer from the American Football League’s San Diego Chargers.

He came to the Permian Basin and played for the Odessa-Midland Comets in 1967 and 1968. They would later become the West Texas Rufneks. As a player-coach, he was an assistant under Ted Dawson, Permian’s first head football coach. The semi-pro team played in the Western Conference of the Continental Football League.

Jacobson was named to the All-Texas Football League in 1968. He would become teammates with former Permian standout Mike Payte in 1969 and the Rufneks would go 7-4 and finish in second place. They played their home games at Odessa’s W.T. Barrett Stadium in front of 4,200 loyal fans. Home games were also played in Midland’s Memorial Stadium.

Jacobson would be hired by coach Gil Bartosh to begin a lengthy career as a member of the Permian coaching staff. He continued those duties under Coach Wilkins. Jacobson would be a part of the storied successes of the Mojo Football program of the 70s and 80s. That reign would claim three State Champion titles and even ESPN National Champions recognition in 1972.

He eventually took over Permian Golf where he brought that program statewide recognition, a level still enjoyed to this day. His coaching career was cut short by a brain aneurysm.  Jacobson would continue to attend the various events and support his Panthers in the years that followed.

Condolences to the Jacobson family in the loss of ‘Coach Jack’.  His contribution to the sports community and the Mojo Family will be long remembered and honored.


*Obituary page on Dignity Memorial where comments can be left.