Odessa, TX – In a game marred in turnovers, Permian would reel off 19 unanswered points in the fourth quarter to surge past El Paso Pebble Hills in a 26-15 season home opening win at Ratliff Stadium on Friday night. 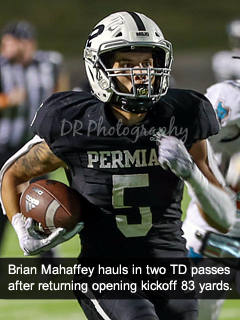 A fired up Permian special teams unit launched into the game in dominating style.  Returner Brian Mahaffey found a wedge and broke into open field to return the opening kickoff 83 yards for the first score of the 2021 season… just 12 ticks into the game.  Things would fizzle on the offensive side of the ball as both defenses took control of the first half.  That would also include four fumbles and three interceptions – three of those fumbles lost by the Panthers.

After pinning Permian deep in its own end of the field, the Spartans were recipients of a free two points when a Mojo bad snap went out of the endzone late in the opening quarter.  Both offenses continued to look for some kind of rhythm throughout much of the second period.

Trailing 7-2, Pebble Hills mounted a scoring drive as the end of the half neared.  Relying heavily on the run-game, the Spartans drove into the Mojo redzone.  A 11-yard TD strike with just 30 seconds on the clock gave the visitors a 9-7 lead that they would take into the locker room.

After a scoreless third frame, the Spartans took advantage of another Mojo miscue to start the fourth.  A 4-yard trot across the goal line capped off a six-play scoring drive and extended the Pebble Hills lead to 15-7.  It would be the last time the Spartans would see the endzone as Permian erupted with 19 unanswered points of their own.

Quarterback Rodney Hall and receiver Mahaffey went to work.  Mahaffey hauled in a 34-yarder to cap a 4-play, 65-yard drive to cut the deficit to 15-13.  The following offensive series featured Hall-to-Mahaffey again, this time on a one-play 57-yard throw-and-catch to give Permian a lead they’d refuse to relinquish the remainder of the contest.

The four point lead became 11 when Tristan Johnson found paydirt from two yards out to make it a 26-15 ballgame.  The Panthers would preserve that deficit and that’s how the home opener would end.  Hall finished the game throwing a perfect 6-for-6 for 126 yards, and Mahaffey accounted for three touchdowns.  Lucas Salazar rushed for 47 yards, while Hall added another 43 ground yards.  Johnson rushed nine times for 40 yards.

Defensively, Jadyn Pruitt recorded two interceptions and Kayden Baze nabbed another Spartan pass.  The Panthers will be on the road Labor Day Weekend, when they face Waco Midway in Hewitt on September 3.  Kickoff is slated for 7:00 p.m. 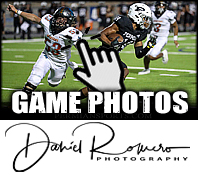