Lubbock, TX – In another solid road performance, Permian’s volleyball team made short work of Lubbock High (25-14, 25-13, 25-18) on Tuesday in the Westerner Gymnasium. 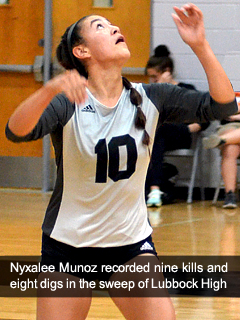 It was business-as-usual for the Lady Panthers as they collected wins in three consecutive sets to defeat the Lady Westerners.  Nyxalee Munoz and Jade Workman each dished out nine kills to lead Permian scorers through the sweep.  Denali Cardenas topped the stat chart with 14 assists and three aces.  Workman finished with 12 assists.

Anyssa Cruz had a productive afternoon, leading all Lady Panthers with 12 digs and four aces.  Anahi Orona contributed 10 digs and Munoz had eight.  Most notable was the level of play and confidence displayed by Mojo.

Another round of tournaments will close out this weekend.  The Varsity will compete in the Godley Tourney, while JV White will be at Odessa High for the ECISD Freshmen Tournament.  The Junior Varsity and JV Black are set to play in the ECISD JV Tourney, with Permian courts playing host.