Abilene, TX – Permian’s stellar unbeaten season came to an end this afternoon in Shotwell Stadium.  While the 5-0 loss to Southlake Carroll is the first loss of 2021 for the Mojo girls soccer team, it eliminates the Lady Panthers from the Class 6A state playoffs. 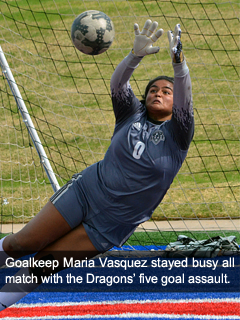 Permian has been able to utilize its speed to disadvantage many of the opponents this season.  The Lady Dragons used their size to neutralize that Mojo quickness in today’s Area Round contest.  Soft passes became turnovers, and in turn, were converted into opposing goals.

Carroll drew first blood just nine minutes into the match when Hanna Khan scored from the left side of the box.  Just two minutes later, the Lady Dragons’ Morgan Quillen found the back of the net for a quick 2-0 SLC lead.  The Lady Panthers tried to adjust their game plan but found it difficult to advance any serious threat into the Carroll end of the field.

Southlake upped the deficit to 3-0 midway into the half.  The Lady Panthers found themselves in unfamiliar territory, trailing by three goals still in the first half.  Mojo mainstay and steady scorers Nyxalee Munoz, Mya Gonzales, and Anai Lopez were continually swarmed, making it difficult to setup scoring opportunities.

Jaden Sosa and Kelsie Fuentez dealt with similar coverage.  In the few possessions they could make some headway, no one was available to advance the ball due to the smothered and congested passing lanes.

After the intermission, the defending 2019 State Champions added two more goals – one on a long range strike by Khan and the other on a Quillen free kick.  Permian finishes the year with 13 wins, five ties, and today’s lone loss.  The Lady Panthers of 2021 add their names to the record books as District and Bi-District Champions.  The majority of the team is made up of underclassmen and will be returning next season.